Sulfur dioxide (SO2) in wine

Today, the use of sulfur dioxide (SO2) is widely accepted as a useful winemaking aide. It is used as a preservative because of its anti-oxidative and anti-microbial properties in wine, but also as a cleaning agent for barrels and winery facilities.

First off, it is a myth that wine can be free of SO2 as it is a by-product of fermentation. Indeed, as stated in Biology of Microorganisms on Grapes, in Must and in Wine, the alcoholic fermentation will produce sulfites in amounts ranging from 10 to over 100 parts per million (ppm). However, most of the SO2 present in wines has been added by the winemaker. Pat Henderson, Senior Winemaker at Kenwood Vineyards, even claims that:

Sulfur dioxide is one of the most effective tools that a winemaker has to protect wine and influence what it will taste like.

Still, that does not mean adding SO2 to wine is a necessity. Although the reality is that almost all winemakers do it.

Getting the Chemistry Right

SO2 is a gaz at room temperature. But when SO2 is (free) in wine, it can take 3 different forms:

From a chemical stand point, this is confusing because winemakers and wine writers use the terms SO2, “sulfur dioxide” or just “sulfur”, interchangeably, to talk about any of those three forms. And when a winemaker says his wine has 100 ppm of SO2, he is most probably referring to the total amount of SO2 in his wine, and that means:

The “contains sulfites” warning is seen on the large majority of bottles.

The warning “contains sulfites” found on the large majority of wine bottles in the US is referring to the fact that SO2 has been added to the wine. Since 1988, all imported and domestic wines, beers and spirits sold in the US which contain more than 10 ppm of total SO2 are required to have that “contains sulfites” warning. The EU has required a similar warning label since 2005. This warning exists because a small minority of people are highly allergic to sulfites, as we will see in a bit.

In comparison, USDA-certified organic wines do not contain any added sulfites (which does not mean the wine is “sulfite-free”). As you might have realized in wine shops, only a small portion of wine sold in the US are certified organic. The reason is that very few winemakers will take the risk of not adding any SO2 at all. In fact, in California, I know of only 2 winemakers: Tony Coturri and Chad Hardesty. 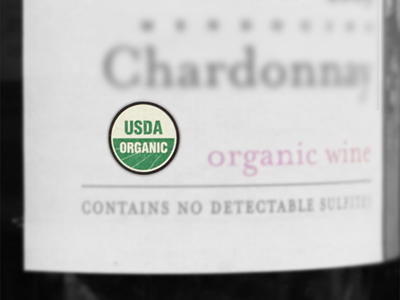 The “Made from organic grapes” as seen on a few bottles.

Of all 3 forms free SO2 can take in wine, only the molecular SO2 is volatile and thus can be detected by our nose. Humans’ sensitivity to SO2 vary widely. According to Dr. Murli R. Dharmadhikari from Iowa State University, an initiated nose will be able to detect SO2 in wine in the range of 15-40 ppm or higher dosage. The odor is similar to the smell of a burnt match.

Oxidation is something many experts will interpret as a wine fault. The oxidized aroma is the one from bruised apple, rank sherry, or nuts. And it’s possible to get rid of it with SO2. However, Goode and Harrop explain that:

[…] SO2 isn’t a straight antioxidant. “There is a general misconception that sulfur dioxide will protect against oxidation,” says wine scientist Roger Boulton of the University of California at Davis. [I]ts main role is binding up the aldehyde formed, so that we do not smell the oxidation product.”

Concretely, what is happening is that the HSO3– ions bind with the aldehyde (the culprit for the oxidative smell) to form a harmless and odourless molecule. Thus the HSO3– ions effectively strip the wine of its oxidative character. That’s a good example that SO2, when used adequately, helps to maintain a wine’s freshness.

The use of SO2 in winemaking is misunderstood and certainly controversial. Félicien Breton, from the famous French Scout website, is straight forward:

[M]any wine authorities will tell you that it is impossible to make a wine which ages well without using sulphur dioxide. This is just not true. The SO2 drastically inhibits the process of oxidation. The alternative is to control oxidation.

This way of thinking has been echoed several times during my interviews with natural winemakers. All of them told me they were trying to use as little SO2 as possible.

SO2 kills the life (yeasts, bacteria) on the grapes, in the juice, and in the wine. It kills the bad stuff, but it also kills the good stuff. This point is crucial: that good stuff is what is needed to make a wine with a sense of place. So how do they make sure you keep only the good stuff in your wine? They all told me the same thing. They must use high quality fruit (organic at a minimum, good ripeness, no mold), and they keep their winery (equipment, destemmer, barrels) clean all the time. More on that later.

SO2, particularly for white wines, is important for freshness. […] Given that a winemaker has very little control over the wine’s storage conditions from the time the wine leaves the winery until it is consumed, it is little wonder that SO2 is so widely used to help guarantee that the bottle of wine you open will be fresh and clean, and taste as the winemaker intended.

Bottom line here: what you want to avoid is wine oxidation. Do you want three winemaker tricks in order to minimize oxidation, which in turn reduces the necessity to use SO2?

The first two tricks are related to wine contents. The lower the pH and the higher the alcohol, the less SO2 a wine needs. Is it a coincidence that several natural winemakers are proud to say that their wines tend to be acid because they want them to pair well with food?

The third trick is related to the bottle closure. Whereas a natural liege cork will allow oxygen to enter progressively into the bottle through the cork’s pores, a screw cap or a glass closure will stop the oxygen from entering the bottle. Therefore, using a screw cap means no oxidation once the wine is bottled.

SO2 is one of the topics in my documentary film Wine From Here which is about the natural wine movement in California. If you are curious, here is a 4-minute excerpt, specifically about the sulfur issue.

Winemaking, winemakers (and their interns) will tell you, is a lot about cleaning in the winery. All surfaces and equipment must be kept clean, not least the barrels about to receive the grape juice. And SO2 can also play a role here.

Some winemakers (including some natural winemakers I interviewed) use a mixture of sulfur, citric acid and water to clean the barrels. Some others (again including some natural winemakers I interviewed) burn sulfur sticks inside the barrel to liberate the SO2 gaz and thus sanitize it. How does that translate into the wine you ask? According to Chatonnet, the combustion of 5 g of sulfur in a 225-liter wooden barrel increases SO2 in wine from 10 to 20 ppm. So we’re still talking about a small dose. 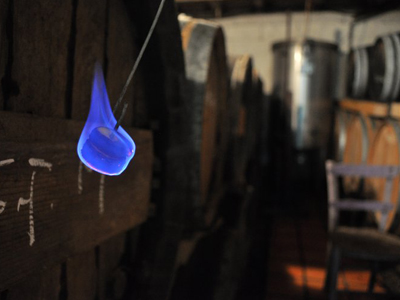 In his book Environmentally induced Illnesses, Thomas A. Kerns mentions that the FDA asserts that about 0.4% of the US population (about a million people) is highly allergic to sulfites. Another way to put it, as several sources report it, is to say that the group the most at risk is the asthmatics (less than 10% of the population). And only about 5% of this group is allergic to sulfites.

Not surprisingly, organic wine merchants, like the Organic Wine Company, are happy to cater to sulfur-sensitive consumers:

Even for moderate wine drinkers, the average level of sulfites found in many commercial wines can cause heartburns or other side effects. […] For them, organic wines are an especially good choice since they contain minimal amounts of sulfites that will in most cases lie below their threshold level.

Well, that’s unlikely. In general, white wine actually contains more sulfites than red wine. And sweet wine contains even more sulfites then white wine. The explanation for these headaches is not entirely clear, but there are several causes.

We often forget that sulfites are also used in the food industry as a preservative. It is mixed in dried fruits (e.g. dried apricots) because of its antimicrobial properties, maintaining the appearance of the fruit and preventing it from rotting. Look on ingredients listings and you will find it.

It is often called E220 when used in this way. Other examples in the food industry is the use of sulfites as a preservative in molasses, preserved radish or dried potato products.

This entry was posted in chemistry, natural wine, sulfur. Bookmark the permalink.

2 Responses to Sulfur dioxide (SO2) in wine